Your browser does not support the Unity Web Player. Want to save the Multiplier for later? Add it to a collection.

Controls (For Singleplayer and Multiplayer):

Units will attack automatically when it sees an enemy unit nearby within its line of sight.

Safety measure is included to prevent players from not being able to split to create more units.


Multiplier, a simplistic real time strategy game, is based on math equations. Given any math equations, your unit depends on the results of said equations, and you can play to see how well your units are.


In this build, you are able to create your own math expressions. As of October 23, 2015, the following simple arithmetic equations are supported:

Future math expressions may be supported.

Trello Scrum board can be found here. This shows the current progression and future plans of the project.

You may play against yourself, or have someone to join you on another computer. If you are playing with yourself, you must also do the Player 2 instructions.


Once both players are in the game, both players will start off with 1 unit each. Please continue to read Controls section for how to play.

Known Issue: Multiplayer Mode and Singleplayer Mode may have hidden bugs due to game engine rewrite.
Known Issue: TODO messages are scattered through the scenes. They are there to remind me of what to do, and will be removed once the scenes are completed.. 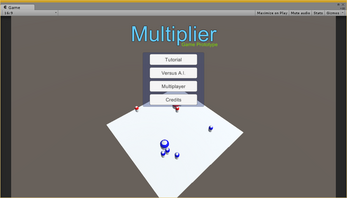